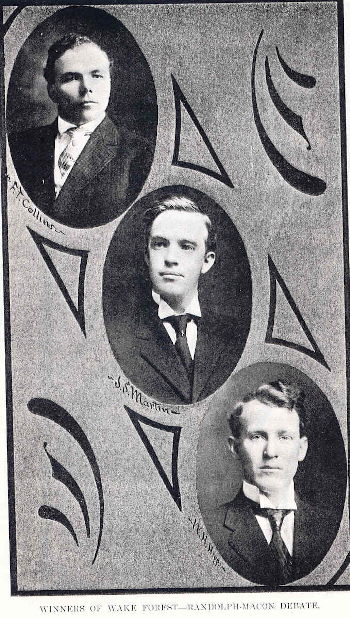 In the early days of Wake Debate, upon returning in the evening, the debaters could announce the victory (often foreshadowed via a telegraph message), unleashing a college-wide celebration. One major event took place in 1909 with a debate victory over Randolph-Macon College in Ashland Virginia. The participating debaters, E. N. Johnson (Philomathesian), H. B. Jones (Euzelian), and D. B. Carrick (Euzelian) were bestowed prominence in the yearbook. The topic debated at Randolph Macon was Resolved: That the United States Government should receive its entire revenue from internal taxation rather than its entire revenue from customs duties.]

The student penned section of the Howler, “History of the Class of 1910” recalled the fall celebration this way:

“We look back with joy to Thanksgiving night, and we can still hear the old college bell ringing out, “Another victory won,” and the music of the pans as the howling mob woke up the town. Some of the speeches which certain members of the Faculty, clad in scanty apparel, made when called from their slumbers, still linger. Particularly do we remember Professor Carlyle’s speech in rhyme, as is his wont, which closed with this inspired couplet:

“While the moon is shining bright,
Now I bid you all good night.”

The following was a supplement pasted in the back of the 1910 Howler. “Newish” is a freshman, yet unaccustomed to the ways of the enlightened.

A part of the program in the reception given the victorious debates was the reading of the following poem, which is said to have been written by one of the ladies of the “Hill”:

“What is the bell a-ringin’ for?” asked Newish from his bed.
“To wake you up, to wake you up,” the other Newish said.
“What makes it ring so loud, so loud?” asked Newish from his bed;
It’s for a celebration,” the other Newish said.
“For we’ve beaten Randolph-Macon–you can hear the students shout:
They’ve got a drum a-beatin’ it an’ running all about;
They’re goin’ to wake the faculty and make ’em speak, no doubt,
For We’ve beaten Randolph-Macon in Virginia.”

“What makes the bonfire burn so bright?” asked Newish from his bed.
“They want to ‘tell the Harricane,” the other Newish said.
“What makes ’em yell and holler so?” asked Newish from his bed.
“Because they just can’t help it,” the other Newish said.
“For we’ve beaten Randolph-Macon, and they’re marching all around,
To wake the folks, the dreaming folks, to hear the joyful sound.
There won’t be much sleep to-night, because the boys have found
They we’ve beaten Randolph-Macon in Virginia.”

“How did we beat them in debate? Asked Newish from his bed.
“Why, Johnson spoke and Jones he spoke, that’s how it was,” he said.
“And have we ever beat before?” asked Newish from his bed.
“Why, yes, it is a habit with Wake Forest boys,” he said.
“We have beaten Randolph-Macon, and this is how ’twas done–
We sent our boys to Ashland town and waited for the fun;
We knew that we would beat ’em, and now you see we’ve won,
We’ve beaten Randolph-Macon in Virginia!”

“Who went to Ashland to debate?” asked Newish from his bed.
“Oh, Johnson went, and Carrick went, and Jones he went,” he said.
“And C. T. Bell, did he go, too?” asked Newish from his bed.
“You bet he did–he always does, and brings us luck,” he said.
“for we’ve beaten Randolph-Macon, and we’ve brought the old cup home,
And we’re going on debating for all the years to come,
Till we’ve beaten all the colleges from Forestville to Rome,
Like we’ve beaten Randolph-Macon in Virginia.”

“Take away automobiles, downtown movies, the quick bus trip to Raleigh, fraternities, most of the other organizations on the campus; cut drastically the activities of the athletics at Wake Forest; take away these things and life would become nearly empty for the modern Wake Forest student.

But hardly more than 40 years ago these present-day advantages did not exist. Perhaps in the early years of the 20th century the “shoo-fly” express would flit through the little town carrying passengers, or on a rare and much noticed event some big passenger train would stop at the little community’s station.

Unless a student did catch the “shoo-fly” or hop a freight to Raleigh probably about once a year, he found himself in a small, compact, homogenous community where everybody knew everybody else and days were quiet and peaceful. That is, the days were quite and peaceful except. . .

One evening in 1909, as it was growing dark, one of the passenger trains which passed through Wake Forest regularly began to slow. Emitting steam and smoke it stopped at the small station.

Such a rare occurrence usually excited the curiosity of the inhabitants anyway. But on this evening there were more than just the curious onlookers; practically the whole town was there.

Luggage in hand, two young men left their seats and prepared to get off the train. They were Elbert N. Johnson and Henry B. Jones, and they had just returned from Virginia. Both knew why everyone was at the station. But they must have been a little stunned when a mass of clamoring people met them at the train’s platform.

Jones and Johnson started to descent from the train;. But their feet never touched the ground. Both young students were lifted in the air on the shoulders of husky athletes. Before them, all the way to Wingate Hall stretched a line of bonfires illuminating the night.

Cheers and shouts rent the night air as the two young men took a free ride to Wingate. Then the celebration in their honor began.

It was the custom in those days to celebrate victories by building a large bonfire, probably in front of Wingate or the administration buildings, and have faculty members make speeches.

On this night it is likely that when the professors stood up to make their speeches they spoke in glowing words the praises of Johnson and Jones. Many speeches must have been made for the victory celebration lasted far into the night.

Nor had this been the first celebration of the two students’ victories. Earlier, telegraph wires had hummed the announcement that debaters Henry Jones, Euzelian, and Elbert Johnson, Philomathesian, had defeated Randolph-Macon College in intercollegiate debate.

That evening the College bell began to toll and students with a wagon searched out Prof. James L. Lake, physics, and placed him in a chair and in the wagon. From his mobile platform, Prof. Lake made the appropriate speech to happy students. This celebration lasted until midnight. . .”

“His tongue is made of whitleather,
His words are shotted lead,
He lifts you like a downy feather,
And stands you on your head.

“He speaks the ear off a frog,
The hair from the ‘possum’s tail,
Routs the fleas off a mangey dog,
Electrifies the pokey snail.”He moves the could to weep in rain,
Or breaks an elephant’s back,
He stops a Seaboard Air Line train,
And speaks it off the track.

“He speaks the bark from forest trees,
The feathers off a goose,
Breaks the spell of the Pleiades,
And turns the Orion loose.