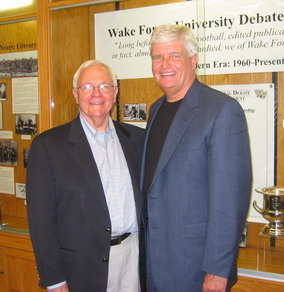 The Merwyn A. Hayes Trophy Case was dedicated Saturday (April 22) in the lobby of Carswell Hall. The dedication was held in conjunction with an alumni reunion of Wake Forest Debaters.

Merwyn Hayes was the Wake Forest University Director of Debate from 1967-1972. He held appointment in the Speech Department and the Babcock School. He also served as Director of the National Debate Tournament for several years. He currently is CEO and President of The Hayes Group International, Inc., a highly successful consulting firm that has served over 1200 organizations. The Hayes group is in Winston Salem.

Hu Odom (’72), the principal donor for the Merwyn Hayes display, is CEO and President of BOTH Inc. in Virginia Beach made the presentation. Hu has over 3000 employees with his Golden Corral franchises.