‘See It Now’ May Picture Winstead 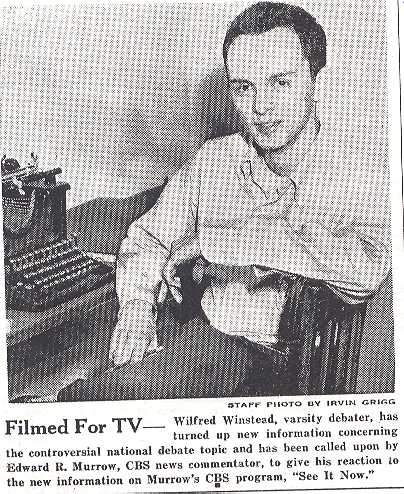 Wilfred Winstead, varsity debater and former editor of Old Gold and Black, told in the filming about facts he discovered while preparing a story for this paper concerning the Library of Congress’ refusal to distribute material to the public on the current debate topic.

The question of debating the topic “Resolved: That the United States Should Extend Diplomatic Recognition to the Communist Government of China,” has become a national controversy. The U. S. service academies have prohibited their students from debating it.

Tomorrow night’s program will show interviews with various persons over the country who have been affected by the government’s apparent opposition to the topic, according to Gene DePoris, agent for Murrow.

Principal scenes will show an actual debate between Princeton and Temple Universities. Wayne Eubank, national president of Tau Kappa Alpha forensic fraternity, will be interviewed as he denounces suppression of the debate topic.

Tommy Chapman, Princeton University sophomore, was filmed discussing a letter he received from Congressman Edward J. Robeson Jr. of the first congressional district in Virginia telling him that he should not debate the topic.

Joseph C. Wetherby, Duke debate coach, appears with Chapman in the filmed presentation. He tells of Duke’s plan to continue debating the topic without alteration. The Roanoke College debate coach, J. F. Prufer, has been filmed. He says that he was afraid to say what he thought in the classroom, and he considers it dangerous for his debaters to debate the affirmative.

Films of Winstead, Chapman, and Wetherby were made on the Duke campus Saturday morning. DePoris stated at that time there is a good chance they will appear on the show, but that there is a possibility the scenes may have to be cut in editing.

Refusal by the Library of Congress to provide information on the national intercollegiate debate topic concerning diplomatic recognition of Communist China was revealed last week in the growing nation-wide controversy over the query.

Also disclosed for the first time was a statement by the Department of State in a letter to Old Gold and Black that the Department “was not involved in any way in the decisions made by the United States service academies and the Library of Congress. . .”

(Students at West Point and Annapolis have been forbidden to debate the topic. Naval Academy debaters have been reported to have said the prohibitive orders came from the state Department.)

The Wake Forest College debate team was informed Oct. 14 by the Library of Congress that, “A brochure on the current collegiate topic. . . is in process of preparation and should be ready within two weeks. A copy will be sent to you as soon as it is available.”

On Oct. 27 the debate team received notice that, “We sincerely regret that the Library of Congress has had to cancel plans to provide material” on the debate topic.

In reply to a letter asking why, contrary to past policy, the Lib. of Congress was refusing to make public material on the debate question, Henry J. Dubester, chief of the General Reference and Bibliography Division, wrote Old Gold Nov. 10. saying that the brochure had been prepared by the Legislative Reference Service but was available for distribution only through offices of members of Congress.

He did not say why the Legislative Reference Service had not permitted his Division to duplicate the brochure for public distribution as had been done in the past.

The Legislative Reference Service is under obligation to provide services for members of Congress, but it has hitherto provided copies to the General Reference and Bibliography Division for distribution to librarians, debate coaches, and debaters.

Dubester cited the foreword of the brochure as stating that it “has been prepared in response to numerous inquires from offices of Members of Congress and is for distribution through those offices.” Dubester continued, “As a result, the General Reference and Bibliography Division has not had is copies available for distribution.”

Duke University has also become involved in the controversy. A debater there received a letter from a member of Congress in answer to a request for material on the debate topic in which the Congressman stated:

“I am amazed to learn that such a topic “Resolved: That the United States Should Extend Diplomatic Recognition to the Communist Government of China” was even seriously considered by any group of persons who are normally intelligent and responsibly informed.

“I have no personal acquaintances either in Congress or elsewhere who have indicated favoring such recognition. . . .

“You will-do me a great favor if you will advise me as to the membership of the National Debating Council and also as to what member of the faculty of Duke University has the responsibility for the debating team.

“I certainly hope you will not] undertake to debate the positive of this subject as quotations from your statements may embarrass you for the rest of your life.”
Commenting on the letter, Duke debate director, J. C. Wetherby, said, “We shall debate this topic throughout the coming year.”

The New York Times pointed out in a recent article that West Point expressed regrets that its team could not debate the issue of recognition of the Peiping regime and suggested an alternative topic, the merits of agricultural subsidies.

The Army’s confirmation of the debate ban said, “It is Department of the Army policy not to have U. S. M. A. cadets involved in debate on such a controversial subject, on which in any event national policy has already been established.”

Commented the Times editorially: ” . . . it appears that the West Point debaters may freely argue the question of domestic agricultural subsidies; a decidedly controversial issue on which there is a national policy more than two decades old.”

Of its ban on debates on recognition of China, the Navy said b that student would have to argue the affirmative which would be tantamount to upholding ‘the Communist philosophy and party line’. . . . to argue (even in a debate) the Communist doctrine would make them liable to misrepresentation, as well as providing the Reds a tremendous propaganda device.” The Times said of the Navy’s : statement, “Does this mean that our naval authorities believe that the Churchill Government of Great Britain is upholding ‘the Communist philosophy and ‘party line’ in recognizing Red China?

. . .Unfortunately, the news of the decision to prohibit such debates gives Communist ‘propaganda additional ‘proof’ to argue that freedom of speech does not exist here.”

Neither the Army nor the Navy has said where the ban originated. The Times’ story said, “Debaters at the Naval Academy were said s have told their counterparts at Princeton University that the e State Department was responsible, for the prohibition.

“But the State Department,” the Times continued, “professed ignorance of such directive and the Pentagon so far has not turned up a copy.”
The letter received by Old Gold,- from the State Department last week apparently disassociates the Department from any order banning the participation of military students in debates on China.

Roanoke College, Roanoke, Va., is reported to be refusing to debate the affirmative sides of the proposition, on grounds that it is dangerous for students to do so if Congressmen are going to take such Positions as was taken in the letter to the Duke debater.

It has also been reported that four teachers’ colleges in Nebraska have refused to permit students to debate the subject. They are at Chardon, Kearney, Peru, and Wayne, all members of the Speech Association of America which selected the topic.

The president of Tau Kappa Alpha. National forensic society. Dr. Wayne Eubank of the University of New Mexico, has strongly condemned opposition to debates on the China question.

The Princeton University Debate Panel has also strongly opposed suppression of the topic in wires to John Foster Dulles, Secretary of the state Department, the governor of Nebraska. presidents of the four state-supported teachers’ colleges in Nebraska, West Point, Annapolis, and the Kings Point Merchant Marine Academy.
The Princeton wire said that the Panel has “passed a resolution condemning this ill-advised attempt to straitjacket the thinking of students at these academies. This is, in our opinion, an ominous imitation of the methods of the Kremlin. . . .

“The Princeton University De bate Panel will not collaborate in this surrender of the right of free speech. . . The committee of debate coaches, by circulating their timorous appeal, have deserted their posts as defenders of free speech, in the face of fire.”

The announcement of bans at the military academies came almost simultaneously with a statement of a different philosophy by Pres. Dwight Eisenhower, West, Point’s most famous living graduate at a recent press conference.

The President, said the report of his conference, believed that the United States system could stand on its feet, and would be upheld by our people in the face of really open and exhaustive discussion. He deplored any idea that you could shut off thoughts and ideas and grow strong. . .

When a people, he believed, get so frightened of new ideas that they couldn’t tolerate them, they were getting frightened of them selves.