As the era of intercollegiate contests rose in importance the “Societies realized a need for a feeder to get high school speakers to go to school at Wake.” A. Clayton Reid worked to establish the contest and a “$50 Scholarship and a gold medal was first prize and a gold pin for second place. ‘This contest is expected to be the means of getting a number of the best speakers from the various high schools of the State to enter College here and thus come into the literary societies.”(1)

The OG&B in 1917, the contests inaugural year, bragged that “the medal was worth $12.50 and the pin was $5. (2) The best speaker in the finals received a scholarship from the College and a medal by the two societies. The second place man was presented with a pin. (3) Holding with Wake traditions only male representatives were allowed to come at first. The “First Declaimers’ contest was held in Wingate Memorial Hall Thursday and Friday afternoon, March 8th and 9th. 52 students from high schools in North Carolina attended.”. (4)

By 1919 The Student reported that “any accredited school could send one representative to speak in the declamation contest. Preliminary contests were held opening night of March 13th and the best were chosen to compete in the final contest on the next day, March 14th. Apparently some schools were reluctant to send students to the 1919 Declamation contest for fear of then serious ailments. In an attempt to convince high schools to send representatives, the Old Gold & Black wrote, “No high school need fear sending a representative because of fear of the influenza or any other epidemic because Wake Forest is absolutely free of every form of disease and has been ever since the Christmas holidays.” (5)

By 1920 the value of the medals increased to a substantial $25 gold medal and $50 scholarship for winner of contest, $12.50 gold pin for second. (6) The contest preliminaries held in two society halls and Memorial Hall. Ten speakers selected to compete in the finals. After prelims, informal reception given in the society halls in honor of the visitors. Finals took place the following afternoon in Memorial Hall. (7) It is not hard to imagine the reception as a major recruiting event for the college.

World War I, however, dampened participation and numbers fell during the war. (8) Eventually awards were extended to the other eight declaimers in the final round, who were awarded college seal pins. (9) In the 1922 contest “S. L. Blanton got first place; came to school here and debated here.” The contests with scholarships of fifty dollars worked their will.

In 1923 the contest became know as the Annual Inter-Scholastic Tournament. The new name reflected expansion of the contests to include track for the first time. (10) Each was school invited to send five representatives for track (but were still restricted to one in the declamation contest). (11) Points awarded to the winners of the first three places in each of the events, and a cup was awarded to the school making the largest number of points in the Tournament. 1923 also added a gold medal for third place in the declamation contest. (12) 1929 saw the track meet portion of the cancelled due to bad conditions of the track. (13)

Until 1930 the contests were administered by Declamation Contest Committee. That year faculty member A. L. Aycock became director of the annual declamation contest and track meet. (14) 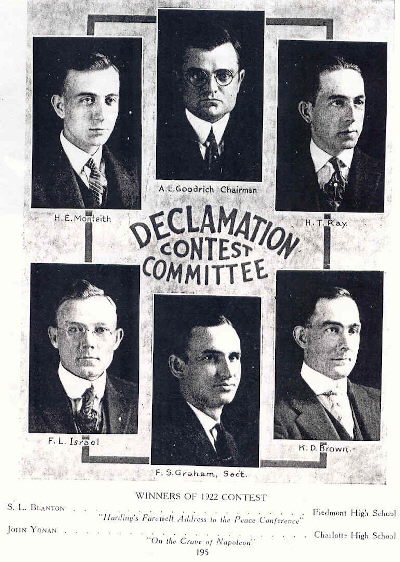 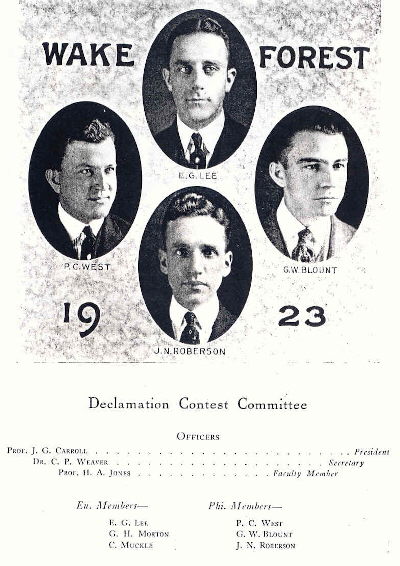 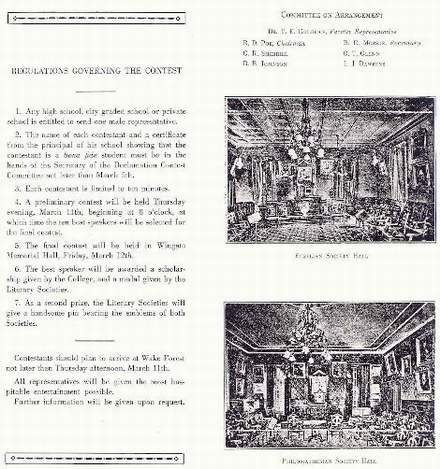 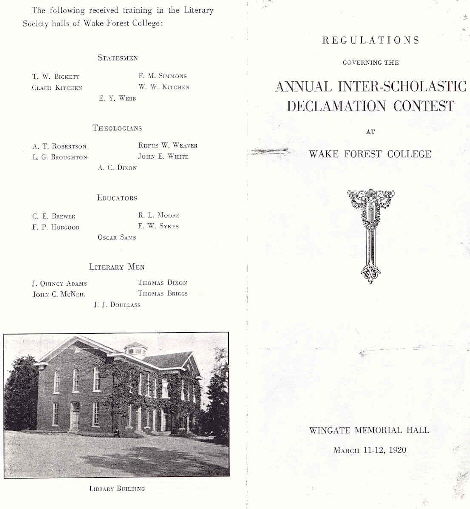 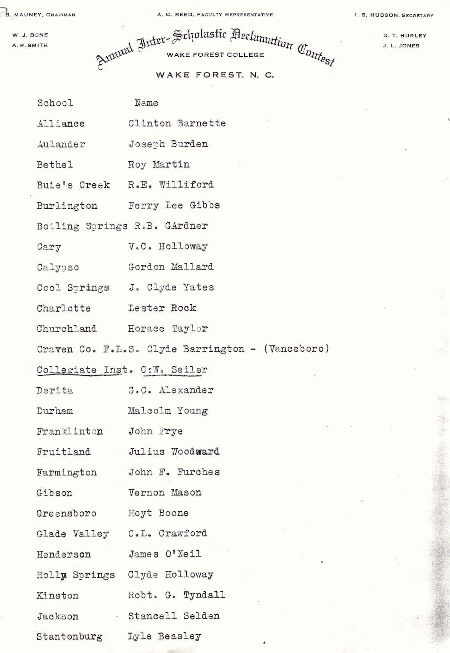 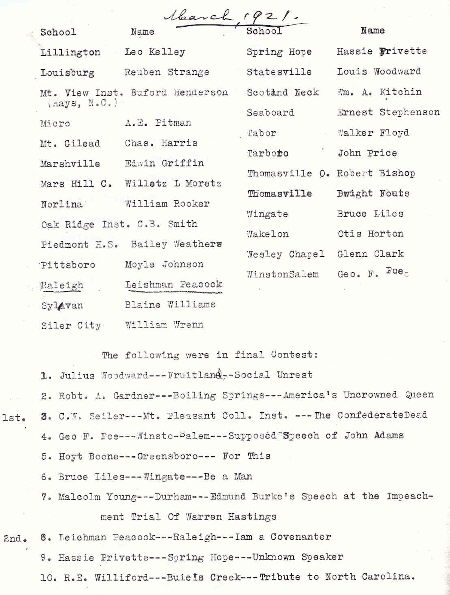