In the midst of World War II, Wake Forest Professor and debate coach Zon Roppe Robinson disappeared from the face of the earth. All efforts to discover information about his disappearance were futile. Robinson began his career at Wake Forest in 1937; in 1943 he told his family and friends that he was leaving and would return once the war was over, but he left few clues about his motive for departure. After the war ended, there was no sign of Robinson. Many people searched for years for any information that could explain his mysterious disappearance, yet found no answers. To this day his story remains one of the most intriguing chapters in Wake Forest debate history.

Robinson was an English professor and the debate coach at Wake Forest from 1937 to 1941. He was characterized by a “simple, direct, quiet manner” and he made many strong friendships at Wake Forest. He led many of his debate teams to victories; in his first year of coaching, the debate team won first place in a joint tournament of the South Atlantic and Kentucky Provinces of Phi Delta Kappa. In 1941 the team won the South Atlantic debate championship again. In addition to his coaching success, he successfully organized the first annual North Carolina High School Debate and Speech Tournament. (Although the high school speech and debate tournaments have been recorded as taking place as early as 1917, Robinson revived the tournaments after a prolonged lapse). It was not unknown to Robinson to use these tournaments as breeding ground for recruiting successful high school debaters, much like the Earlybird does even today. Robinson’s successor as debate coach, Professor A. Lewis Aycock, commented, “He had a very strong personality. When I first took over his speech work, I found on tours that Zon had made a good reputation for both himself and Wake Forest wherever he had been. Many teams asked that the Wake Forest Coach judge their debates, thinking that Zon was still with us. He was always successful in human contacts” (The Student, December 1947). The college registrar said, “He was a young man who had the ability for independent though. I like him.” It is no wonder why several years after his disappearance that the school considered to still be on leave of absence.

After several successful years as debate coach, Robinson took a leave of absence from Wake Forest in 1941 to complete his Ph.D. in public speaking at Syracuse University. In 1943, still a student at Syracuse, Robinson notified Wake Forest that his leave would need to be extended because he was joining the army. In January 1943, Robinson left High Point, North Carolina on a train and was never seen or heard from again.

After the war, when his friends and family had not received any word from him, they naturally tried to determine what had happened to him. His friend who worked at a local newspaper requested enlisted the help of the Associated Press. Dean Bryan of Wake Forest requested help from Congressman Cooley. Senator Hoey requested information from the War Department. Syracuse University was anxious to find him. The Red Cross even worked on the search. All of these requests came up empty. In 1947, The Student ran a story on his disappearance. In 1953, the Old Gold and Black also ran a story. Despite all the efforts to find any information on Robinson, none of it led to any answers.

Many theories accounting for his whereabouts were proposed during the manhunt. Robinson had told his family that “your letters won’t get to me, and where I’ll be I won’t be able to write-not until after the war!” His last words to his parents were “Always remember, no news is good news.” From these statements and similar clues, it was assumed that he had entered some form of military duty. However, all of the negative replies from the War Department seemed to discount that supposition. But that theory was not abandoned, because he had also mentioned that he was “going into intelligence.” Was it possible that the government had covered up his disappearance? This seems plausible, since even though he indicated that he was joining the Army, he had been classified as 4-F, rendering him physically unfit for military service. Was this part of an intelligence cover-up so that no one could guess his whereabouts? Or was Robinson using the war as an excuse to disappear? His father had initially believed that his son’s German fluency would have been very useful for the U.S. military during the war. This seems to lend more credence to his joining the Army. One rumor surfaced that he may have entered the military of a foreign country, but his friends were sure that he “would not have forsaken his country.” He never had a passport, so this ruled out the possibility of his departure from the country as a U.S. citizen. There were even rumors that he may not have even left North Carolina; his sister never actually saw him board the train in 1943 and a man who had known him since he was a boy even claimed to have seen him in Charlotte in 1948. Some even believed that he may have left because of a broken romance at Syracuse University, but his closest friends never believed he would disappear to escape reality. Despite all these rumors and speculations, no concrete evidence ever proved or disproved any of them.

Now almost 60 years later, it is doubtful that there will ever be a resolution to his disappearance. Despite the fact that he only coached for a few years, his legacy lives on through Wake Forest’s debate team and his mysterious story will never be forgotten. 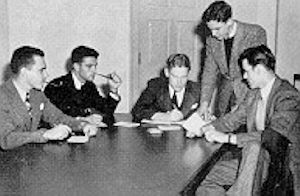 The 1941 Howler (Wake’s yearbook) wrote: “On the debate squad and Prof. Zon Robinson rests much of the reputation of Wake Forest College. It is said that as soon as one announces that he is a student or graduate of the Baptist institution, he is expected to arise and make a soul-stirring oration, and when one examines the record of the this year’s debate team, it is not hard to believe that all this is not a legend.” 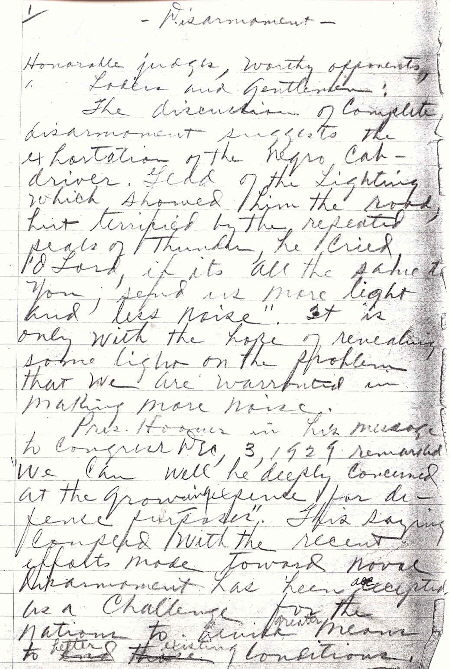 First page of Zon Robinson’s Speech for a debate on “Disarmanent” with Wingate Jr. College in 1930. Before becoming coach Robinson debated as a Wake Forest College student.

“Last week the Kings Mountain Association held its annual meeting and it looked like a state Convention. At this meeting Mr. Zon Robinson appeared and spoke and he delivered a timely stirring, and dynamic message. It was, in fact, the most inspiring message delivered during the meetings of the association. He thrilled u and made us all proud that we have Wake Forest College and all of the other Christian colleges in this country of ours. I was proud of him. We also heard the finest echoes from Sandy Run and Gaston County Associations where he spoke. He ably represents "Old Gold and Black."” Excerpt from a letter to Wake Forest President Dr. Thurman Kitchin from Zeno Wall, Pastor First Baptist Church. Part of Robinson's mission at Wake Forest was his religious work. October 25, 1937

This letter concerning Zon Robinson’s initial appointment to Wake Forest has any number of interesting aspects. Not only were the ambitions modest concerning the speech team, but the levels of endorsement were even more tepid. Also the references to religious work and ethnic references give insight into a different era of American thinking.

Zon was over yesterday afternoon. I think he is the right man. We will probably not be able to find the ideal man. Few such animas exist. Then, too, we ourselves do not know exactly what is to do and thus makes it even more difficult. .All in all I believe Zon is as good as we can do–I favor him.

He brought this question up. I had not thought of it before. He is tremendously interested in having something to do with the debating and Speaking teams here and to give that little course in argumentation that Quisenberry gave. Zon thinks this a real advantage to him in his religious work with the students. He mentioned many advantages that he thought that would give him. I agree with him that there would be some advantage in that connection with the students. The only point is whether or not that would take too much of his time from his other work. I told him that would be a question for you and him to decide. It may be a good idea him do something like that his first year at any rate, while his exact duties are being evolved.

The salary you mentioned to him in your letter is satisfactory with him and he will come whole-heartedly and enthusiastically but he is power fully anxious to have that connection with the student speakers. He has been doing that for two years at Campbell and is intensely interested in that relationship.
On the whole I think he is all right and I think his idea of doing that work with the students is not bad. He can explain to you more in detail what he thinks the advantages of him doing this.

Yes, the boys are getting “hat up” but I am like the old Negro at an evangelistic meeting. At the conc1usion the preacher asked for expressions and one “rizs” up and said that he had played crap, lift chickens from the roost, been on a chain gang, run away with his neighbor’s wife, cut folks up with razors and lots of other things, but thank God in it all he hadn’t lost his religion. That’s me. ”

Give my love to all the folks.

With best personal wishes, I am
Cordially yours.