A Century of Intercollegiate Debate

Fifteen hundred Raleigh residents and visiting students crowded the standing room only Academy of Music Hall on a festive evening one hundred and two years ago to witness the first intercollegiate debate between Wake Forest College and Trinity College (Duke). The 1897 debate between the men of Wake Forest and Trinity marked the first decision debate beyond the walls of Wake Forest, beginning a century long tradition of excellence in intercollegiate competition. The joint appearance was among the earliest contests in the South. 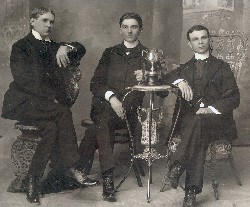 The debate was a culmination of a full day of Thanksgiving celebration of church services and cranberry-turkey feasts. The Raleigh orchestra furnished the music for the gathering that included most of the Wake Forest faculty and students, many of whom arrived in Raleigh on a “Special,” a train linking the quit town of Wake Forest with the capital city some twenty miles south.

The Raleigh The News and Observer, recorded the event’s flavor the next day: 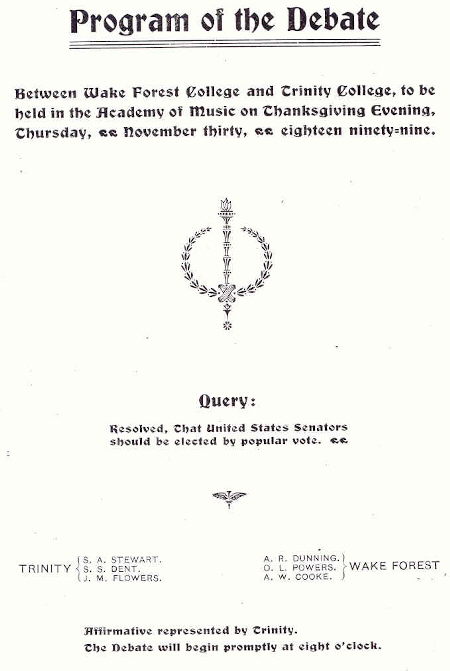 Many a time in recent years has this city been stark, staring football mad on Thanksgiving day, but at no time has college spirit and enthusiasms run higher than it did yesterday and last night. Great crowds have gone out to witness these games, but none greater or so appreciative as that which listened to last night’s debate. Many victories have been lost and won here on the athletic field by one or the other of these institutions, but none half as glorious or that will be so long remembered as was the decision of last night’s contest of brain against brain and oratory against oratory.

It was a great intellectual battle–nobly was it fought and worthily won and no battered athlete on the football field every had cause to be so proud or was ever such a hero in the eyes of the world and his comrades as were the three men who won the victory for their college. The shades of Wingate and Craven would have rejoiced had they heard the scions of their respective institutions contending for the intellectual mastery before that great audience.

The Observer’s multiple headlines shouted the importance of the event:

“Feeling ran high an the debate progressed and in the drawn face and gleaming eye of the collegian in the audience you could read of the intense yearning for success that was flaring up in his bosom, and when a speaker would score a point his fellow students would go into a frenzy of applause” the News and Observer reported. “Those in the gallery would rise to their feet and with waving hats and saying bodies set up such a hurrah as was never heard before. . . “This beats football all the hollow,” remarked a great lover of the game, after one of the best speeches and wildest scenes of the night.

Wake students Charles Utley, Albert Cannady, and Thomas Johnson defended the negative on the query, “Ought the systems of Water Works, Lighting, and Street Cars be operated by the city for its people, or by private individuals?” Each speaker gave a twelve minute speech and spoke for seven minutes in rejoinder.The judges were President Dinwiddie of Peace Institute; Prof. Hugh Morson, of the Raleigh Male Academy, and Capt. S. A. Ashe. “Three better judges could not have been selected,” the paper noted. The Hon. C. H. Mebane, State Superintendent of Public Instruction served as moderator and welcomed the audience, calling the debate “rich intellectual feast that was about to spread before them.”The Trinity debaters argued that the South was fifty years behind the times, as cities around the world had assumed ownership of utilities to the benefit of their citizens. The first affirmative, for example, lamented “In North Carolina we have private ownership, and then Robinson’s circus comes alone the water is already so yellow that his fakirs don’t have to put any coloring matter into their fancy lemonade.” There is nothing more dangerous to our liberties than “these soulless corporations.” 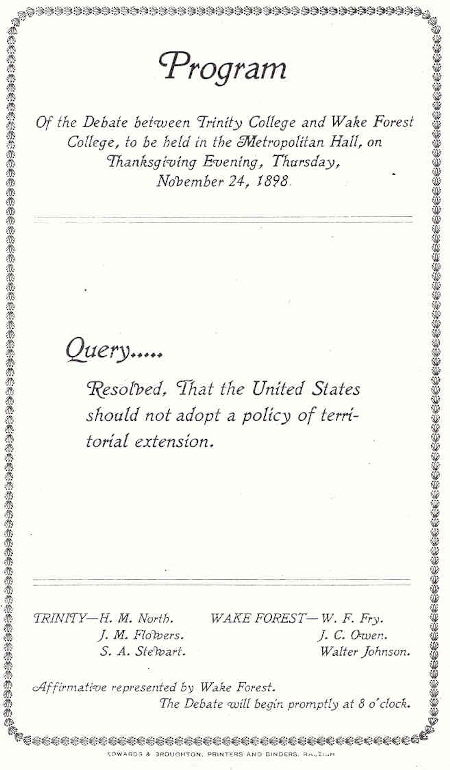 Wake Forest countered on the negative that cities control of public works “meant more public offices and thereby the power of the political machine would be increased and the opportunities and temptations to bribery and corruption made greater and more dangerous.” He added, “Every city has its Tammany.” Some might find reflections of current political thinking in Albert Cannady’s claim that “Government Ownership is prescribed as a panacea for all evils of society. This utopian idea is socialistic and originated in the brain of a dreamer. Socialism and democracy are antagonistic.”

Newspaper account of the fifth debate in the series, 1901

“The Cup,” as the trophy was referred to in Wake Forest publications, was donated by the Raleigh Chamber of Commerce. After Trinity withdrew from the series after losing the fifth match in 1901, the trophy remained at Wake Forest and became the center piece of subsequent debate series with Richmond and Randolph-Macon for nearly a decade. Wake won each of the multiple-year series, 2-1 and retained permanent possession of the cup to this day. The N&O account the last match follows:

IT WAS A MAGNIFICENT AUDIENCE

The Verdict of the Judges WAS Unani-
mous. Who Praised Trinity in
High Terms For the Splendid Pre-
sentation of Their Cause. The Silver
Trophy Presented to Wake Forest
by’ Mr. A. J. Fields. The Speeches
Remarkably Fine and Eloquently
Delivered.

All Raleigh was represented in the vast throng that gathered In the Academy of music last night.

It ”’as a gala occasion, and while the lower floor had a touch of soberness because of the garb of the gentlemen, the gallery was a garden of color and loveliness, filled with handsomely dressed young ladies representing the educational institutions of Raleigh, some schools attending in a body.

The occasion which caused the cultured gathering of Raleigh’s best citizens was the Annual Debate between Wake Forest and Trinity College each being represented by three of its students.

It was the fifth of these debates, and twice had the prize gone to trinity, whole Wake Forest had likewise won twice. Last night was the odd number and by virtue of three out of five Wake Forest is now ahead. It was the winner a year ago, and right valiantly it defended the “cut” this year.

This cup, the prize of the debate, is a handsome silver loving cup, placed in competition by the Raleigh chamber of Commerce, the promoter of these annual debates. These are set Thanksgiving day each year, but this year, because of sickness on the part of Trinity debaters the event was postponed until last night.

The Academy filled rapidly after the doors opened, there being present large delegations from Trinity wake Forest, the schools and colleges of Raleigh and the general public. The colors of the two colleges flew side by side in friendly rivalry in the audience, and during the time preceding the debate there were cheers and counter cheers by the college men present.

When the curtain rose at a few minutes after eight o’clock it was an inspiring sight that greeted the eye of the young orators on the stage. Every seat occupied, all aisles crowded and a volume of applause sending the hot blood of anticipation to the cheek, for as it would well again it would mean victory for one and defeat for the other. Would the “Blue” of Trinity or the “Gold and Black” or Wake Forest wave in victorious breeze of applause.

Seated on the right of the stage were the “cup defenders,” the debaters from Wake Forest-Messrs. William Albion Dunn, of Scotland Neck, a senior; J C. Little, of Union county, a junior, these advocating the affirmative, and O. P. Dickinson, of Nash county, a junior. On the opposite side of the stage sat the representatives of Trinity, Messrs. C. L. Hornaday of Beaufort, a senior; L. I. Howard, of Mobile, Ala., a junior, and W. H. Brown, of Warrenton, a senior, who represented the negative.

The meeting was presided over by Mr. F. T. Ward, the President or the Raleigh Chamber of Commerce. Seated with him was Mr. Alex J. Field, who was present to deliver the cup to the winning trio in the debate. The secretary for the debate was Mr. O. M. Mull, of Wake Forest, the time-keeper being for Trinily, Mr. F. W. Fink, of Concord; for Wake Forest, Mr. A. J. Bethea, of Marion, S. C.

After the raising of the curtain there was little time spent in preliminaries. President Ward in a few well chosen words welcomed the vast audience, stated the purpose of the gathering and read the agreement entered into between the debater, this being that the award in the debate should be governed by the argument, counting oratory and delivery only as they were part of the argument. After a reminder that noise and confusion in the hall were not expected he gave way to the secretary.

Mr. Mull then read the subject at the debate, this being the query “Resolved, That the State of North Carolina Should Adopt the Principle of Compulsory Attendance upon Her Public Schools”, and presented the first debater to Mr. W. A. Dunn, of Wake Forest.

Immediately in front of the stage sat the judges who were to make the award, Rev. Dr. J. E. Stagg, of Charlotte, Prof. Geo. A. Grimsley, of Greensboro, and Mr. F. S. Sprull, of Louisburg, and these 1ooked up expectantly as the first debater began.

Mr. William A. Dunn, of Halifax county, opened the debate in a magnificent plea for compulsory attendance. He addressed himself to his subject with ease and familiarity and was awarded close attention for his able argument and eloquence. He was followed by Mr. W. H. Brown for the negative in a strong speech. Then for the affirmative Mr. 0. P. Dickinson spoke, followed by Mr. C. L. Hornaday, J. C. Little closing for the affirmative and Mr. L. P. Howard for the negative, all these speaking with force and ability.

Then after music came the rejoinders from each speaker, These were to the point and were well applauded as were the set arguments.

The question then went to the judges and finally came the announcement “Wake Forest Wins.”

Then there was applause in abundance, and to spare, the colors of the winning college waving triumphantly.

The cup was presented to the successful debaters in a happy speech by Mr. Alex J. Field and the great debate was over.