Debates on the issues surrounding September 11th and its aftermath.

On the Sunday afternoon of November 18 at 3:30 p.m. the Wake Forest University campus will be the site of an extraordinary event: “The National Debate-In” on the issues pertaining to September 11th and its aftermath. The top-ranked intercollegiate debate teams from across the United States are dedicating their intellectual, research, and rhetorical resources to public debates designed to answer the public’s call for reasoned argument on issues including civil liberties, the causes of terrorism, diplomatic versus military solutions, arms control, “war” rhetoric, and more. It is anticipated that a public audience will choose from a program of dozens of debates.

The idea for the debates springs from the national intercollegiate debate community’s observation that while the media churn out volumes of information, panels of experts weigh in with their opinions, and discussion forums are held, debates are a uniquely valuable vehicle for civic engagement. At a moment in history that demands the best of our democracy, it is essential that proposed answers to the questions raised by September 11th be subjected to careful, critical analysis. Unlike the three minute sound bite-sized television shouting matches, academic debate’s dialectical method carefully compares and evaluates ideas. The debate community, like the public at large does not have easy answers and is not of one mind concerning all of the policy ramifications. But what debaters do have to offer is the ability to organize and explore the arguments we all need to grapple with. The expectation is that debaters and the public will leave the debates ready and willing to ask the next questions and to seek reasoned answers to them.

All debates will include time for audience participation including audience cross-examination and post-debate discussion. A reception for the public audience and all debaters will be held at the conclusion of the debates.

“In a crisis, when the stakes are so high, it is especially important to pursue exactly the sort of analysis that debate teaches. When we are dealing with lives, with enormous economic stakes, it is so important that there be open debate of alternatives. That is the best way of preventing tragic mistakes. Dissent is never disloyal. Debating something is one of the most patriotic things we can do. One mistake that has often been made in the past is to equate those who want to question and challenge with those who are disloyal. That is just wrong. So I think that by debating, we send one of the best messages we can about how we should go about making decisions as a society and what it is we are really fighting for.” Erwin Chemerinsky, Sydney M. Irmas Professor of Public Interest Law, Legal Ethics and Political Science at the University of Southern California School of Law

If ever there is a time when critical thinking and debate should be especially valued, it¹s in a time of crisis. Patriotism and unity are very important values. But even more important is informed judgment that is the product of critical discussion and debate. It¹s important that we understand what we are united about and why. It¹s important that we not allow our patriotism to mislead or misdirect us. And we must remember that the civilization and society we struggle to preserve is precisely a society that values critical thinking, reasoned advocacy, discussion, and debate. I am tremendously encouraged by the fact that the best debate students in the U.S. are devoting their energies and resources to this project and that the public is being invited in as well. David Zarefsky, John Evans Professor of Speech and Professor of Communication Studies at Northwestern University; former Dean of the School of Speech at Northwestern 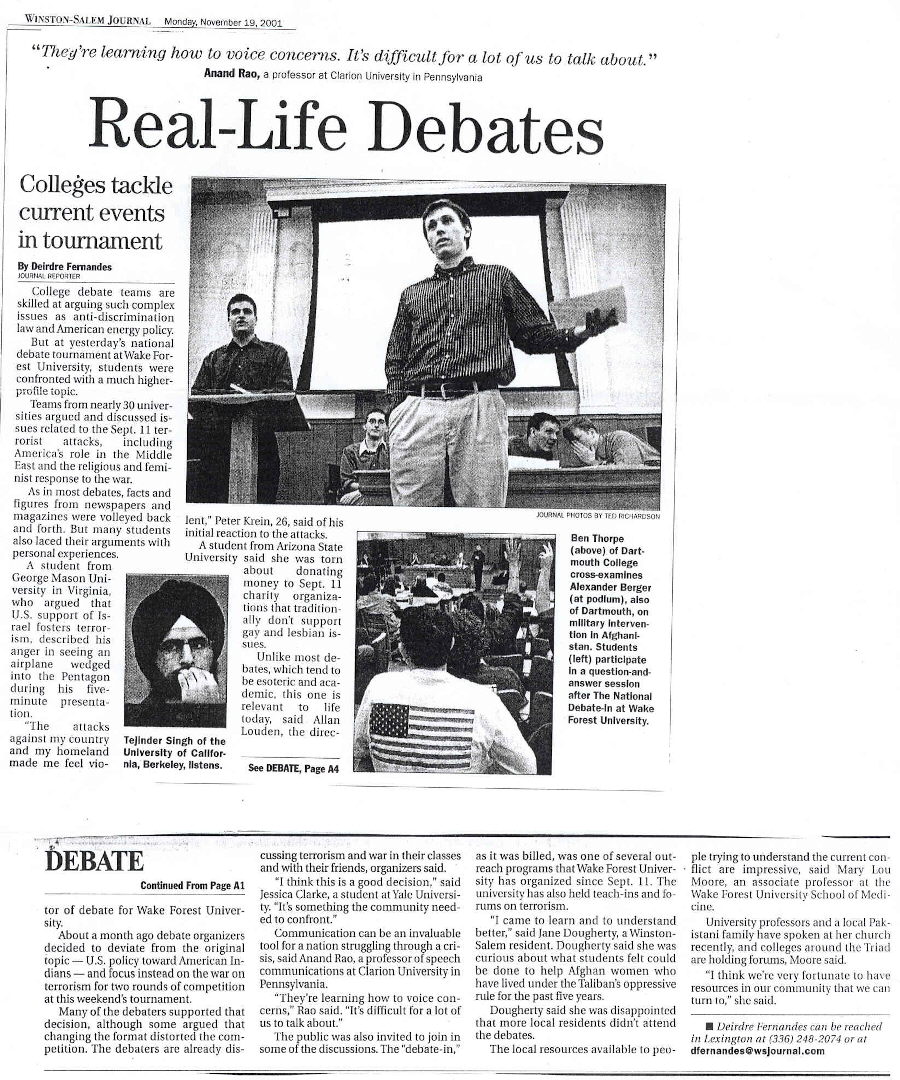