Debating “Around” the War Years

The year was 1941, the date of the event was approximately the weekend following the Thanksgiving holiday. The event was the Dixie Classic, held at Winthrop College, Rock Hill, SC Colleges throughout the Southeast participated in this event which had a successful history of approximately twenty years. Our debate professor, Lewis Aycock, decided that it would be more efficient if he drove our small group directly from Wake Forest to Rock Hill for this meeting. The railroads were being heavily loaded with excessive demands from the government and military and we were unable to use this superior method of transport on short notice. Our team included Burnett Harvey, retired Dean of Law, Boston College, Sam Behrends, Corporate Counsel, deceased, John Dixon Davis, retired minister and author, Bynum Shaw, retired professor and author and myself. We all crammed into Professor A’s automobile and arrived safely at Rock Hill. Although I was invited as a freshman member of this group, my two years of debate at R. J. Reynolds High in Winston-Salem allowed me to feel fairly competent to be involved. On the morning of the first rounds, one of the team members became violently ill with an intestinal problem and was unable to report. I was hastily summoned to fill the void. As a team with John Dixon Davis, we debated a proposition “Resolved that American railroads be nationalized by the U.S. government.” John and I won the affirmative of this proposition in the morning. In the afternoon we debated the negative of the same proposition and we were winners of that contest. It was an added dividend that I won the medal as Champion Parliamentarian having been pushed into this event at the last moment by the professor who was short of entrants. This tournament was a great moment in my young scholastic career. It was overshadowed, however, within two weeks by the Japanese bombing of Pearl Harbor which set the country into a tremendous upheaval and things have never again been the same.

Perhaps my most rewarding personal achievement in debate occurred as a senior in May 1948, following 3 years in World War II service, when I debated and won the proposition “Resolved that the use of atomic bombs be outlawed by all nations.” This was sponsored by the Eu and Phi Societies. The judge was Dr. Robert E Lee, Dean of the Law School.

My activities with the Wake Forest Debate Squad were some of the most valuable ones of my life. Most of my business success can be attributed to skills learned in debate and those learned in creative writing under Professor E. Folk. Though I majored in business administration, without these two developed skills however, I do not believe my success would have been nearly so complete. Students of today who are involved in debate are to be commended and I am thrilled to see the great success that Wake Forest teams continue to achieve.

“Life at Wake Forest was changed this year, too. There was no doubt about it. From the moment Dean Bryan announced in chapel that a division of the Army Finance School would settle down here in August, we know that we were in for a new kind of experience-adapting ourselves and our school work to wartime conditions. And when the soldiers did arrive, we saw that we faced still another new experience-the feeling of sacrifice.

By December we had given up our cafeteria, our gymnasium, our dormitories, our just completed music-religion building, and two of our classroom buildings. Five fraternities, forced out Simmons, had had to find new houses. We found ourselves deprived of home basketball, taking physical education outdoors, eating in restaurants downtown, and rearranging our mode of life.”

TO THE WAKE FOREST men who are fighting for their country, their world, and a better day:

The student body of Wake Forest College in the spring of 1945 dedicates this book to all of you men and women who have in other times been members of this body but who are now engaged in the tasks of World War II.

Most of you we have never seen, but we feel that we know you because a few years ago, last year, last month you too were students at Wake Forest. You hurried into the same classrooms at the sound of the same bell. You joined the same fraternities, studied the same books, looked into the same mail boxes, bummed rides at the same corners.

Now you are the 2,800 Wake Forest men in uniform. You are generals and privates, commanders and gobs, leathernecks, coast guardsmen and merchant seamen. You march in deep snow. You fight in the steaming jungle. You watch endless days crawl by at sea. You dodge enemy flak among the stars.

We are frequently reminded of you when. a draft board summons one of us to join you. We know that the story behind the headlines and the news flashes is your story. We know that you who once like us complained of Spanish and algebra now have longer, harder assignments in courses you did not choose. You who once like us arose reluctantly for an 8:30 history class (or slept through it) now awake at dawn, or earlier, to make history. You who once like us laughed at the heroes and cheered the heroines on the screen in the local theater are the heroes and the heroines in a greater, sadder drama. 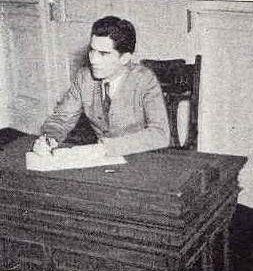 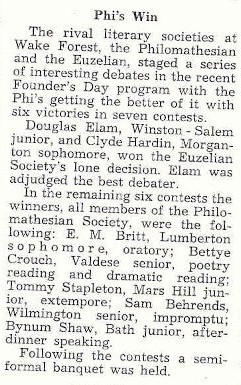 In 1946 intercollegiate debating, a casualty of the war, was revived under the coaching of Prof. A. L. Aycock, who served Wake Forest in amazingly diverse capacities in his long association with the college. Veteran oratorical performers Samuel Behrends, Jr., Henry Huff, Kermit Caldwell, and Daniel Lovelace were joined by bright young talents like T. Lamar Caudle, J. B. Scott, and Vernon Wall, Jr., and they fielded the premier teams of the national debating circuit. So prestigious were the titles and awards they brought home that Old Gold was prompted to ask editorially, “Mr. Aycock, how do you do it?” 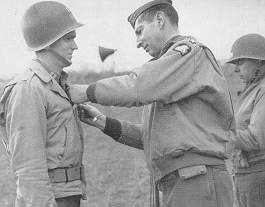 David L. Beavers received the Silver Medal from the hand of Gen. Mark W. Clark. Capt. Beavers graduated in 1937, was president of the Phi Society